In the Spring time as the snow melts, we hear a lot from people finding a web of matted down grass criss-crossing their lawns like a highway system. Many are quick to assume it’s white grubs or blame other insects, either for directly killing the grass or attracting burrowing animals. Some homeowners are seriously upset about the ‘devastation’.

The truth is that their lawns are in no danger from the ‘highways’. 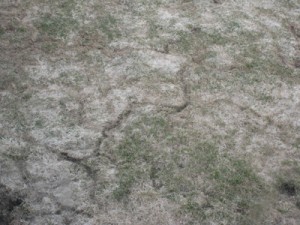 Vole runways in a lawn after spring thaw

Highways is a good name for the tracks too, as what you are seeing on your lawn is the under-snow travel tunnels of Voles. Voles are tiny rodents, usually found in fields, ravines and newly constructed areas.  People often mistake them for moles as they look similar.  The difference is that voles are vegetarians and only eat plant parts, so there is no way they’d even be interested in grubs. Moles by contrast are insect eaters who typically leave behind mounds of soil.  Voles use your grass food and shelter under the snow.

The little guys loved winters with lots of snow. A thick layer of snow is a great place to hide under, away from predators. There’s lots of food, and the snow insulates the tunnels, especially when the voles line the tunnels with dead grass and thatch.  Milder winters that are lighter on snow, are the times we expect to see fewer vole tracks.

Once the snow is gone, the voles head back to the fields and ravines where it is easier to hide, abandoning the paths they’ve stomped down. A nice vigorous raking with a leaf rake – something you should be doing after the thaw anyway – to get the grass to stand up again, along with your regular spring shot of pick-me-up fertilizer will erase those tracks fast.  If your tracks are severe, add a little seed, but be sure to use a seed variety that will properly blend in with your existing lawn.  Kyle Tobin has even more information about vole tracks and other Spring concerns in our April lawn care checklist.

Vole tracks and tunnels under snow