A question about dethatching

I recently received a good question about dethatching in my email.

“Is dethatching a lawn necessary or even advisable with sandy well drained soil?”

Only if you have extreme thatch. We consider it an emergency service for lawns that are being starved of moisture and air because of the build-up.

Normally extreme thatch occurs because of infrequent mowing and long clippings left on the lawn.  All lawns require some thatch (less than ½ inch) in order to protect sensitive roots and keep moisture in the soil.

We rarely see thatch bad enough to harm a lawn, but I do sometimes find really serious problems, like the thick, spongy layer of thatch I found on top of the soil in this customer’s lawn. I found this thick, matted mass on a client’s lawn. The grass’ roots were not even reaching the soil!

You can reduce your chances of building up thatch by mowing every 5-7 days, and making sure you are never removing more than 1/3 of the blade of grass.

Thatch build up can also be caused by shallow watering that forces roots to stay near the surface of the soil thatch interface. 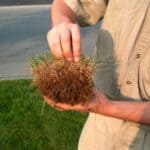 Overfertilizing with high nitrogen fertilizer and high pH levels will also get you fast-growing grass that is slow to break down when cut.

Heavy soils too, can lead to this condition. When the soil is waterlogged and badly compacted, roots simply can’t push their way deep into the ground, and end up growing sideways into a tangled mess.

It is a problem because it creates a favourable environment for insects and disease to thrive.

It is caused because the plant matter does not break down as quickly as it is added to.

Take a look at this close up! It’s like the grass is trying to grow on a block of foam. The roots of this grass were over an inch away from actual soil.

If dethatching you are pulling and ripping at roots, so be sure to overseed afterward.

Regular Aeration is the number one thing to help to prevent it from occurring.