The Snow is melting, whats wrong with my lawn? Snow Mould!

Here is a common question we’ve received in the past week, snow mould is pretty normal after a winter with lots of snow. (But it can be very damaging) 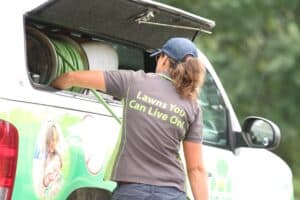 “I used your services last year and am about to renew, but noticed my lawn doesn’t look like the others on the street.  All lawns are a brownish colour, but mine also has many very white patches and spots throughout. Any idea why?”
SS

The white spots on your lawn are snow mould. This is a common problem after we have a heavy snow load in the winter.  Here’s what that means:

What is Snow Mould?

Snow mould is a fungal disease that occurs in lawns that remain wet and consistently damp for long periods of time. As the name implies, it occurs most often after the winter as the snow is melting from your yard.

There are two types of snow moulds, gray and pink, that become active under the snow.

Why Is Snow Mould Growing On My Grass? The second reason, if the grass is more lush underneath, (from being taken care of well) meaning there is more nitrogen in the leaf blade, then it will be more susceptible to snow mould.

But this is also the reason why it appears more pronounced when contrasted against your greener lawn. It is also why your lawn will green up even quicker this spring since the nutrients are already there!

How Do You Prevent Snow Mould?

There are a number of tasks you could do to your lawn to prevent snow mould. These should be done in the fall before any snow accumulates.

Mow your lawn before winter sets in. (should be 2.5 inches)

Rake leaves and other debris off the lawn before snowfalls.

Sometimes it’s not just snow mould.  In the 2nd picture, they also have a dog that has been doing its business on top of the snow, mainly in one section of the lawn.

* Dog and Pet damage compound the problem by adding a higher level of salt to the soil in a concentrated location.  This can be remedied with a specialized application from your LawnSavers professional!  In addition, it is important to rake these areas out thoroughly and to dilute the area with extra watering as soon as possible to flush and spread the salt concentration so grass can regrow.

How Do You Treat Snow Mould in Toronto?

Like all lawn fungal diseases, you can apply a fungicide (for snow mould this would be done in the Fall). However, in our experience, the prevention of snow mould by regular lawn maintenance is the best option.

Will My Grass Recover From Snow Mould?

Yes, your grass will usually recover just fine. It doesn’t normally kill the grass as the mould does not affect the roots of the plant.

In the Spring, when the grass is relatively dry and not frozen on the surface; just lightly rake the grass to lift up the blades a bit to allow air circulation. The situation normally resolves itself as the grass starts to grow with warmer temperatures.

It doesn’t normally affect the roots, just the leafy tissue on the surface. It usually looks like a bit of a fuzzy web-like mass is growing on top of the blades. These are mycelium that are part of the fungus. You’ll notice it’s usually on the areas where the snow was slower to melt. Make sure to mow your lawn between 2 3/4″-3″ before winter sets in. Be sure to rake leaves and other debris off the lawn before snowfalls. It doesn’t normally kill the grass. Re-seed with cultivars of grass-like LawnSavers custom blend which contain varieties of seed that are bred to be resistant to this fungus.

The good thing is that it’s only superficial and just requires a very light raking with a leaf rake to allow air penetration through the lawn.  The well-nourished plant will grow through this with new leaf tissue.

Aerating and OverSeeding, as well as a balanced and well-fortified slow-release fertilizer, will make all the difference

So in short, snow mould is nothing to worry about.  A light raking and those areas will more than likely disappear as soon as the soil warms up and the grass starts to grow!

Use our spring checklist to get the growing season off to a good start.
Start whenever it’s above 10 deg C outside and the lawn is not too wet.

I hope this helps,

What A Happy Client Says About Us on Google

Used Lawnsavers for many years now. Very reliable, reasonably priced, responsive to any concerns I might have, and the lawn continues to look terrific! Recommend them highly!
Ron G.
⭐⭐⭐⭐⭐